Discover Istanbul: the neighborhoods of Fener and Balat

Dear friends, in this article I would like talking about an interesting trip I did with my school colleagues in two very particular neighborhoods of Istanbul: Fener and Balat, where, among the curiosities, I found many links with the land I was born, the region of Puglia, for a historical and cultural background, obviously. So, let’s lose ourselves in the imagination and get carried away in this mini tour in the charming city of Istanbul…

Before starting our tour, I want to give you some news about the two neighborhoods. Fener and Balat, are two very intriguing and charming neighborhoods of Istanbul, full of history and culture, where different people, religions and languages live together, as they were a real living mosaic.

They are interesting from the human and architectural point of view, in this game of monuments, houses, colors and traditions. Yet, in spite of the richness of art, culture and life, these two neighborhoods are less visited from the numerous tourists who come in Istanbul every year.

The two districts are in the European side of Istanbul, placed inside the walls of the old city, and both of them look out the Golden Horn (Haliç in Turkish). During the Byzantine age, the Orthodox people (known also as Rum), lived together with Jewis and Catholic people, coming from the Italian business communities. After the conquest of Istanbul, new groups set themselves up the city, for example the gipsy coming from the Balkan peninsula or the Muslims from Anatolia. 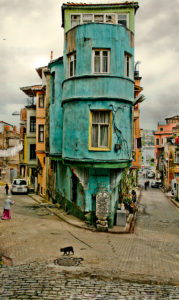 Our tour starts seeing the Gül Cami ‘’The pink mosque’’, it is in the area known as Cibali, the Islamic part of the neighborhood. Earlier the mosque was an Orthodox church ˗ Hagia Theodosias (Saint Theodosia), turned into a mosque later. This was one of the biggest church after Saint Sophia.

The building still shows the original Orthodox Latin cross plan, probably dating back to 1100, during the age of Komnenos’. It was seriously damaged because of fires and earthquakes during the centuries, and just in the XVII century it was restored.

The last restoration goes back during the XIX century, thanks to the sultan Mahmud II. In the lateral apse of the church there is a sacred grave belonging to Gül Baba (the Pink pope), considered an holy orthodox man, probably linked to the cult of Saint Theodosia. Going out of the mosque and coming into an alley, on the backs of Golden Horn, we get to Aya Kapı (the Holy Door).

It seems it tooks its name from the Orthodox church of Hagia Nicola. The Church of Saint Nicholas is one of the most original and characteristic churches of the Byzantine age. Inside the church we can admire an ancient altar build by the merchants and sailors.

Saint Nicholas was the bishop of Myra in Lycia (the present Turkey) and he is the same patron saint of the city of Bari. He was one the most venerated saints in the world. In the entry of the aisle we can admire a little ship model and a particular fresco, in honor of the saint, who was both guardian of children and also of the chemists, merchants, sailors and fishermen.

Proceeding, finally we enter the picturesque Greek neighborhood of Fener. The district is characterized by narrow, slanting and labyrithine streets. The typical wooden and painted Ottoman houses are very particular and charming, some of them going back to two hundred years ago.

In the past these houses belonged to many Ottoman persons of letters. Lot of these houses have been restored and changed into hotels or restaurants.

The Fener neighborhood (known also as Fanar or Phanar), comes from the Greek φανάρι, a fire lit to help the sailing; so it was a sort of lantern or torch used in the commercial port of Golden Horn.
During the Byzantine age, the Phanarion neighborhood was not so important, as it became during the Latin domination, for example. A legend tells about the heroic quest of citizens against the Ottoman troops, defending their district for some days later the fall of the city.

Today, many Greek Rūm (later called Fener’s people) live in the Fener neighborhood, for most discending from those who coming from the Peloponnese or from the Trabzon area and the Kara Deniz (Black Sea). In addion, here dwelt also the Ecumenical Patriarch of Costantinople, namely the Greek˗Orthodox Church. In the neighborhood there are also some Greek schools, such as Megali Tou Genoe Scholè, the ‘’Big Folk School’’, built around the IXI century, the Orthodox churches, such as the Church of Saint Mary of Mongolians. This church is the only building of the Orthodox cult, dating back to the Byzantine times, still operating.

Always in this neighborhood, we visit the Saint George’s Cathedral, a little architectural masterpieace. It was restored around the 1700’s. It is a little and simple church but also one of the most important places for the Christian religion. (it is more or less important like Saint Peter, in Rome). The church has got a deep symbolic and historical value; in fact it is one of the five main branches of the Christian Church, as pecking order.

The church guards priceless relics, among them: the relics of Saint Andrew the Apostle (considered the first bishop of the city), ones of Saint Gregory the Theologia and Saint John Chrysostom and Saint Euphemia. Besides, the church seems also to keep a fragment coming from one of the (supposed) columns of the fragellation of Jesus Christ.

In the lateral apse there are three sarcophagi belonging to three saints venerated by the Orthodox church (St. Solomon, St. Theophane and St. Euphemia); whereas, among the other important objects, we can admire an old patriarchal throne (V century).

From the church, coming into the criss˗cross lanes, full of painted houses with bizarre shapes, we reach the Rum Lisesi (the Greek Orthodox high school), built in 1881 by the architect Diamadis. Here we can see the wonderful building and its dome made of red bricks that dominates the hill of Fener, surrounded by ˗ in turn ˗ one of the most ‘’conservative’’ heighborhoods of Istanbul, the Çarşamba (Wednesday in Turkish).

During the XVII century, when the Patriarchal Church was moved in this area, many Orthodox aristocrat and rich families built the new houses around the church. During the XVIII and IXI century, they represented the magnificence of the Fener. Unfortunately, after the Greek revolt of 1821, and after the tragic event of September 1955, many of these residences were completely left and neglected. Only in recent years some of these buildings have been restored and enhanced.

Scramble up a picturesque staircase, we get the top of the Fener hill where, many years ago, there were the ancient walls of Costantinople, and where a castle rose up and included into the Byzantine walls. Here, we can observe the remains of an old house/building belonging to Dimitrie Cantemir.

He was a person of letters, historian and philosopher, compositor and musician, a linguist, of Moldavan origins. He was also a voivoda, namely the governor of Moldava during the Ottoman age. Just on the remais of this house rises up another church, mostly unknown but very important from the historical point of view. It is the Church of Saint Mary of Mongolians, or also called ‘’ Red Church. Its history is really interesting and nice but, unfortunately, there isn’t any published documents about it. As it was completely forgotten.

Walking along the Golden Horn, we get the Sveti Stefan Kilisesi (the Bulgarian Church of Saint Stephan), famous because it is completely made of iron and rich of decorations inside. It was built around 1898 in the neo Gothic style, becoming an important symbol for the Bulgarians’ independence. The structure of the church was built in Vienna, before, dismantled and sent by boat along the Danube River, later and then reassembled in Istanbul.

From Saint Stephan Church we reach the suggestive neighborhood of Balat, a Jewish district both during the Byzantine and Ottoman domination. The Jewish people, who lived in this district, started to leave it after the terrible earthquake of 1894, when a part of them settled in the Galata district, and others prefers to establish in Israel. After 1960, a rich Jewish minority moved in the neighborhood of Şişli (always in the European side of Istanbul).

This depopulation caused a remarkable transformation of the rich district of Balat that became a district populated by immigrants and lower class, living a period of neglicence and indifference, until to some years ago. In fact just recently the neighborhood of Balat has been reconsidered thanks to some development works by Unesco. In the neighborhood just three synagogue are survived: the Synagogue of Cana, the Synagoge of Yanbol and the Synagogue of Ahrida, considered the most beautiful, a masterpiece, and still operating. However, it can be visited following liaison with the rabbi.

The Jewish who lived in this district, were already present during the Byzantine age, because they were granted to stay in Istanbul after the occupation of the city. Sephardic Jews lived in Istanbul for over 500 years; they left the Iberian peninsula because of the Spanish inquisition in 1492 when, after the fall of the Moors domination of Andalusia, they were forced to convert to Christianity or die. The Ottoman sultan Bayezid II (1481˗1512), sent a big fleet, led by Kemal Reis, to save the Sephardic Jews.

It seems that more than 200 hundred thousand of Jews moved towards Algeria, and later continued on to Thessaloniki till to settle in Istanbul. The sultan gave them the possibility to take refuge under the Ottoman empire. In addition, many Jews coming from the middle and Eastern Europe, took shelter in Istanbul during the Nazi’s persecution in the 1930’s. at present more or less 20.000 Sephardic Jews live in Istanbul; some synagogues are open for the cult, among them the most important is the Neve Shalom Synagogue, inaugurated in 1951, in the characteristic district of Beyoğlu.

Walking through the streets of Balat we can see some artisanal shops of fishermen, butchers and merchants, or the inns and kahveane, the typical café alla turca. Moreover, it needs to suggest the Agora Mayhanesi (namely the famous meyhane, litterally the house of wine), typical traditional restaurants, where they sell alcohol, such as the rakı ( aniseed aniseed beverage).

Going toward the center of Balat, hidden in a lane, there is the Church of Surp Hrescfagabet, one of the most interesting Armenian churches. Before being entrusted to Amenians by the sultan Mehmet II, it was a Greek Orthodox church. It was a very old church with a hagiasma (sacred spring), devoted to Agios Eustratios. The building is big but in a bad state, maybe in the past it housed an Armenian school. The door of the church is very interesting, made of embossed bronze panels, made around to 1727.

From the Armenian church, going on, we can admire the Mosque of Ferruh Kethüda, build by one of the most famous Turkish architect, Sinan. The building is little and include a religious school, a convent, a fountain and the courthouse. The most of these building is seriously in a bad state, at present.
And finally, after a walk through the quaint lanes of Balat, our trip comes to an end. We can come back to the reality, hoping this trip aroused your curiosity and, above all, the wish to visit this incredible city just once. this enchanting and attractive city. Surely, those who visit Istanbul are fascinated and will take a pleasing memory in their heart for ever.